American photographer Attila von Szalay was among the first to try recording what he believed to be voices of the dead as a way to augment his investigations in photographing ghosts. He began his attempts in 1941 using a 78 rpm record, but it wasn’t until 1956, after switching to a reel-to-reel tape recorder, that he believed he was successful.

Working with Raymond Bayless, von Szalay conducted a number of recording sessions with a custom-made apparatus, consisting of a microphone in an insulated cabinet connected to an external recording device and speaker. Szalay reported finding many sounds on the tape that could not be heard on the speaker at the time of recording, some of which were recorded when there was no one in the cabinet.

He believed these sounds to be the voices of discarnate spirits. Among the first recordings believed to be spirit voices were such messages as “This is G!”, “Hot dog, Art!”, and “Merry Christmas and Happy New Year to you all”. Von Szalay and Bayless’ work was published by the Journal of the American Society for Psychical Research in 1959. Bayless later went on to co-author the 1979 book, Phone Calls From the Dead.

In 1959, Swedish painter and film producer Friedrich Jürgenson was recording bird songs. Upon playing the tape later, he heard what he interpreted to be his dead father’s voice and then the spirit of his deceased wife calling his name. He went on to make several more recordings, including one that he said contained a message from his late mother.

Konstantin Raudive, a Latvian psychologist who had taught at the University of Uppsala, Sweden and who had worked in conjunction with Jürgenson, made over 100,000 recordings which he described as being communications with discarnate people. Some of these recordings were conducted in an RF-screened laboratory and contained words Raudive said were identifiable.

In an attempt to confirm the content of his collection of recordings, Raudive invited listeners to hear and interpret them. He believed that the clarity of the voices heard in his recordings implied that they could not be readily explained by normal means. Raudive published his first book, Breakthrough: An Amazing Experiment in Electronic Communication with the Dead in 1968 and it was translated into English in 1971.

In 1980, William O’Neil constructed an electronic audio device called “The Spiricom.” O’Neil claimed the device was built to specifications which he received psychically.

from George Mueller, a scientist who had died six years previously. At a Washington, DC, press conference on April 6, 1982, O’Neil stated that he was able to hold two-way conversations with spirits through the Spiricom device, and provided the design specifications to researchers for free. However, nobody is known to have replicated O’Neil’s results using their own Spiricom devices.

O’Neil’s partner, retired industrialist George Meek, attributed O’Neil’s success, and the inability of others to replicate it, to O’Neil’s mediumistic abilities forming part of the loop that made the system work. However, there is strong evidence to suggest that the recordings of conversations were falsified by O’Neil, specifically with an electrolarynx.

The clearly audible vocal fricatives in the recordings, along with the fact that during the hours of recordings O’Neil’s and Mueller’s voices never overlap (as would happen in normal conversation), support this theory. 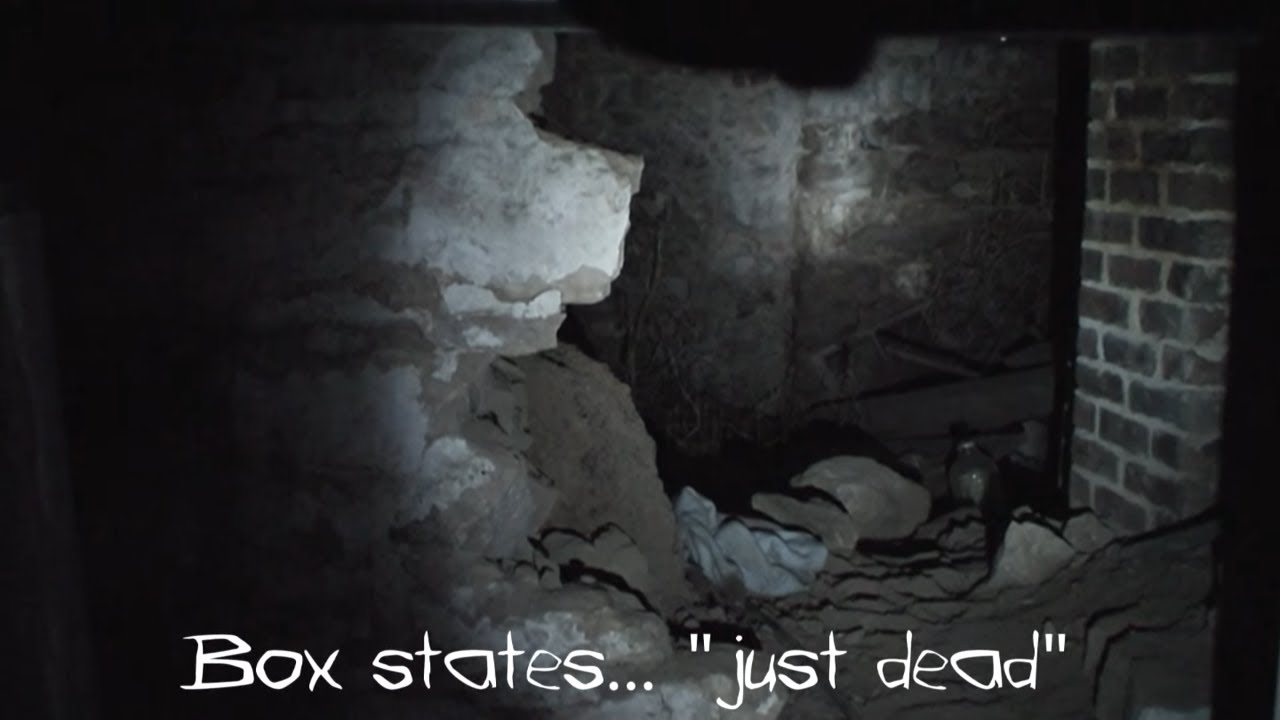 Another electronic device specifically constructed in an attempt to capture EVP is “Frank’s Box” or the “Ghost Box”. Created in 2002 by EVP enthusiast Frank Sumption for supposed real-time communication with the dead, Sumption claims he received his design instructions from the spirit world.

The device is described as a combination white noise generator and AM radio receiver modified to sweep back and forth through the AM band selecting split-second snippets of sound. Critics of the device say its effect is subjective and incapable of being replicated, and since it relies on radio noise, any meaningful response a user gets is purSince its inception in the 1950s, Electronic Voice Phenomena (EVP) has been studied by scientists, parapsychologists, and ghost hunters alike. Attila von Szalay and Raymond Bayless are credited with being the first to attempt recording voices from beyond the grave in 1941. It wasn’t until 1956 that they achieved success in their endeavors when switching away from old 78 rpm records to a reel-to-reel tape recorder. The discovery was published in 1959 by The Journal of American Society for Psychical Research and Bayless went on to collaborate with Sarah Estep and write the 1997 book Phone Calls From The Dead which explored their journey into the supernatural realm. To this day, EVP continues to be a topic of much interest and debate as paranormal enthusiasts continue to search for answers within audio recordings made at supposed haunted locations.ely coincidental, or simply the result of pareidolia.

In 1982, Sarah Estep founded the American Association of Electronic Voice Phenomena (AA-EVP) in Severna Park, Maryland, a nonprofit organization with the purpose of increasing awareness of EVP, and of teaching standardized methods for capturing it.

Estep began her exploration of EVP in 1976, and says she has made hundreds of recordings of messages from deceased friends, relatives, and other individuals, including Konstantin Raudive, Beethoven, a lamplighter from 18th century Philadelphia, Pennsylvania, and extraterrestrials whom she speculated originated from other planets or dimensions.

The term Instrumental Trans-Communication (ITC) was coined by Ernst Senkowski in the 1970s to refer more generally to communication through any sort of electronic device such as tape recorders, fax machines, television sets or computers between spirits or other discarnate entities and the living.

One particularly famous claimed incidence of ITC occurred when the image of EVP enthusiast Friedrich Jürgenson (whose funeral was held that day) was said to have appeared on a television in the home of a colleague, which had been purposefully tuned to a vacant channel. ITC enthusiasts also look at TV and video camera feedback loop of the Droste effect.

In 1979, parapsychologist D. Scott Rogo described an alleged paranormal phenomenon in which people report that they receive simple, brief, and usually single-occurrence telephone calls from spirits of deceased relatives, friends, or strangers.

In 1997, Imants Barušs, of the Department of Psychology at the University of Western Ontario, conducted a series of experiments using the methods of EVP investigator Konstantin Raudive, and the work of “instrumental transcommunication researcher” Mark Macy, as a guide. A radio was tuned to an empty frequency, and over 81 sessions a total of 60 hours and 11 minutes of recordings were collected.

During recordings, a person either sat in silence or attempted to make verbal contact with potential sources of EVP. Barušs stated that he did record several events that sounded like voices, but they were too few and too random to represent viable data and too open to interpretation to be described definitively as EVP.

He concluded: “While we did replicate EVP in the weak sense of finding voices on audio tapes, none of the phenomena found in our study was clearly anomalous, let alone attributable to discarnate beings. Hence we have failed to replicate EVP in the strong sense.” The findings were published in the Journal of Scientific Exploration in 2001, and include a literature review.

In 2005, the Journal of the Society for Psychical Research published a report by paranormal investigator Alexander MacRae. MacRae conducted recording sessions using a device of his own design that generated EVP.  In an attempt to demonstrate that different individuals would interpret EVP in the recordings the same way, MacRae asked seven people to compare some selections to a list of five phrases he provided and to choose the best match. MacRae said the results of the listening panels indicated that the selections were of paranormal origin.

Portable digital voice recorders are currently the technology of choice for EVP investigators. Since these devices are very susceptible to Radio Frequency (RF) contamination, EVP enthusiasts sometimes try to record EVP in RF- and sound-screened rooms.

Nevertheless, in order to record EVP there has to be noise in the audio circuits of the device used to produce the EVP For this reason, those who attempt to record EVP often use two recorders that have differing quality audio circuitry and rely on noise heard from the poorer quality instrument to generate EVP.

Some EVP enthusiasts describe hearing the words in EVP as an ability, much like learning a new language. Skeptics say that the claimed instances are all either hoaxes or misinterpretations of natural phenomena. EVP and ITC are seldom researched within the scientific community and, as ideas, are generally derided by scientists when asked.

Explanations and origins of EVP

Paranormal explanations for EVP generally assume the production of EVP by communicating intelligence through means other than the typical functioning of communication technologies. Natural explanations for reported instances of EVP tend to dispute this assumption explicitly and provide explanations that do not require novel mechanisms that are not based on recognized scientific phenomena.

There are a number of simple scientific explanations that can account for why some listeners to the static on audio devices may believe they hear voices, including radio interference and the tendency of the human brain to recognize patterns in random stimuli. Some recordings may be hoaxes created by frauds or pranksters.